“This Loss We Carry” 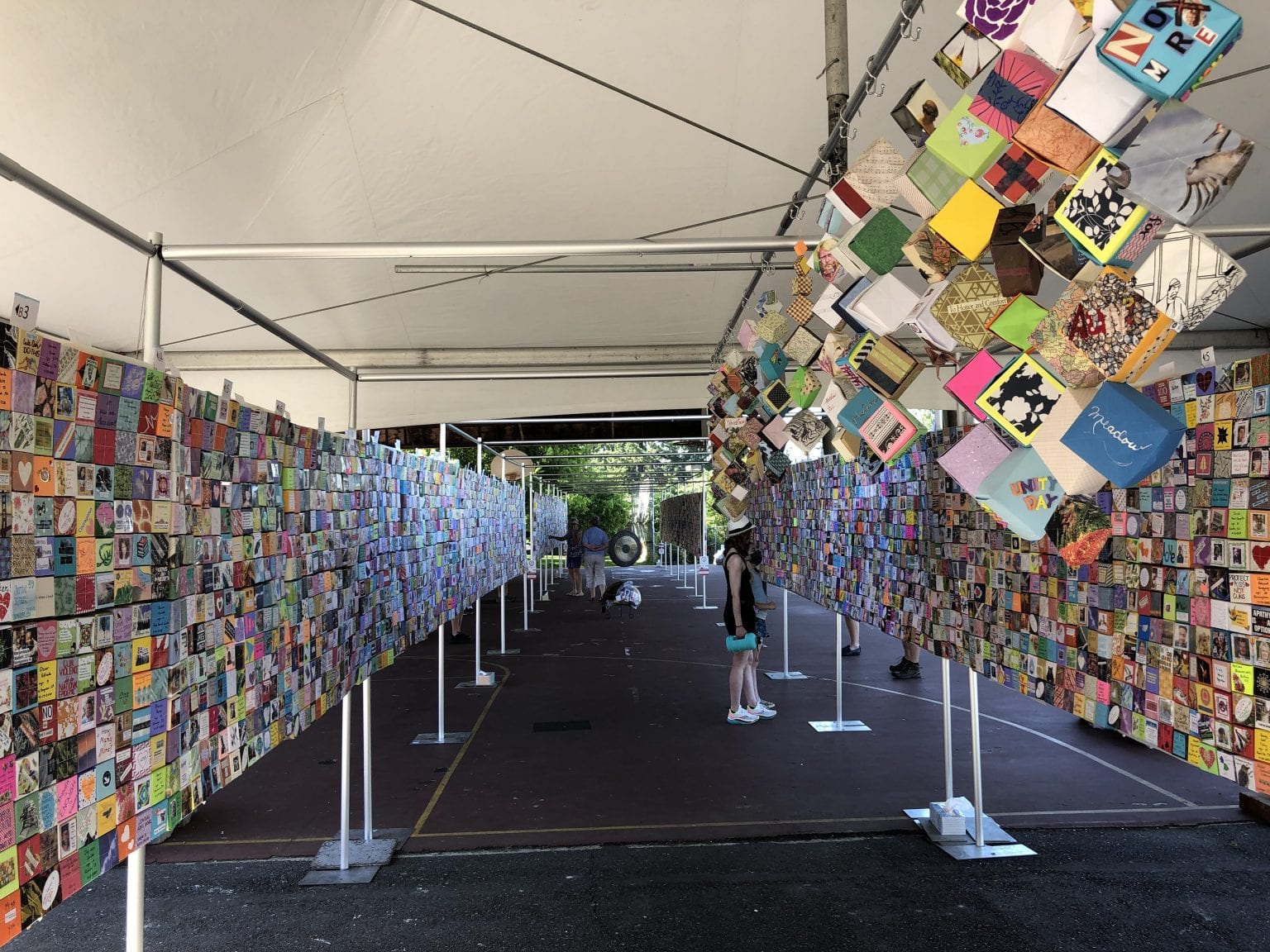 An origami box: two square sheets of paper transformed into a tribute to a person – a father, mother, child, daughter, son, human – a loved one lost to death by gunshot. That is a Soul Box. It’s also the arts activism project that I have worked on with many friends at NDPC for well over a year now. Our co-pastor Beth Waltemath learned of the initiative and suggested it to the Peace and Justice Committee as a way to augment our congregation’s monthly commitment to remember Georgia victims of gun violence as we read their names aloud. In fall of 2019, members of the Craftivists group hosted box-making sessions during coffee hour in the Fellowship Hall. When the pandemic quarantine began, many members and friends joined the original group focused on “crafting for a cause” in a commitment to create a Soul Box for every Georgia life lost in 2020. 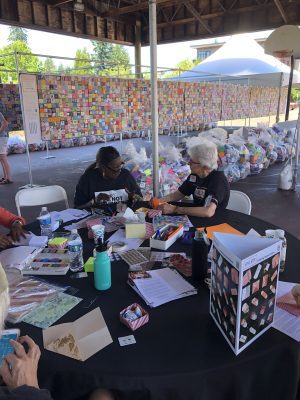 The result of that church wide commitment yielded twelve panels of 98 boxes each, and a total of more than 1200 boxes. I am proud of the many NDPC hands that made those memorials, and I know that all of us had mixed feelings about the work we did – grief at the loss and pain, compassion for and connection with the individuals we honored on each box, a humble satisfaction in creating our tiny tributes and making them as lovely as we could, and gratitude for being a part of something bigger, knowing that many people around the country were also remembering victims of gunfire as we were. We first displayed our panels during the outdoor Ash Wednesday service last spring, and they are now hanging in the downstairs hallway of NDPC between the Pastor’s Study and the Studio Classroom.

Our 1200 boxes, our twelve panels, will be among 200,000 boxes as part of the Soul Box Procession and Exhibition on the National Mall in Washington DC on October 16-17, 2021. To prepare for this massive undertaking, the Oregon-based organizers of the Soul Box Project staged a local event as a sort of dress rehearsal. With support from NDPC’s Peace and Justice Committee, my husband, Tim Merritt, and I were able to join the project’s founder, Leslie Lee, and her volunteer team to make the June Portland event a reality. 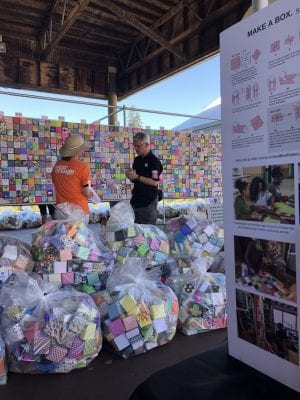 Ellen and I traveled to Portland last month to help the Soul Box Project install “This Loss We Carry,“ a public exhibit of 66,000 Soul Boxes, a small fraction of the multitude of those folded by volunteers across the country. The June exhibit served as a dress rehearsal for the much larger exhibit this October on the National Mall in Washington D.C. I was deeply moved as I worked: the display is a stark representation of the ever-accumulating numbers of individual victims.

I thought I had a rough sense of the problem here in Georgia. I’d helped Ellen and other NDPC members with logistics for our church’s folding of more than 1200 Soul Boxes, and during the months of Covid, Kathleen Allen sent me the names of hundreds of Georgia gun victims for the monthly slide shows in worship. In Portland, though, the numbers were far greater. I helped assemble a display of tens of thousands of names of gun violence victims across the country, from Alabama to Washington.

Our 30-person volunteer crew worked for hours in the record-breaking heat on Friday, the enormity of the numbers never far from our minds.

It took 9 hours to put together the hanging display of almost 10,000 Soul Box panels. To open Saturday’s formal exhibit, volunteers in procession carried another 56,000 boxes to the somber beat of a snare drum. This provided a profound sense of the overwhelming numbers of fathers and mothers, sons and daughters who are injured or killed by gun violence every single day in America.

The unprecedented heat wave limited attendance in the afternoon. In a quiet period, I looked between the two rows of panels and saw a woman reaching up with her phone to take a picture of a Soul Box. As I moved closer to her, I saw she was quietly weeping as she continued to look up at the box. All I could think to do was to say, “I’m so sorry for your loss.” She looked at me for a moment and said, “My son.” She thanked me, for acknowledging her and her grief, with immense sadness. I respectfully left her to her thoughts. In that moment, I realized I can only begin to imagine the raw grief and pain of having a loved one die so suddenly, so violently.

The October exhibit in Washington D.C. will be much bigger and, we hope, impossible to ignore.

The Soul Box Project will display more than 200,000 boxes to show both the huge number of lost loved ones, those who mourn them, and the commitment of the many volunteers who created these memorials.

I know those mixed feelings I described earlier were a part of Tim’s experience, too. In Portland, we felt both heartbroken and energized, both purposeful and powerless. We witnessed compassion and commitment, and we connected with fellow volunteers on a level that was rich and real. 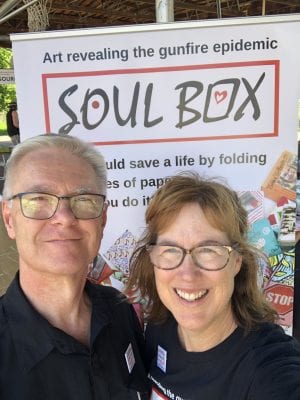 There were tears and belly laughs as we spent an unforgettable weekend doing important work together. This September, we will display our Georgia panels at the Wild Goose Festival in North Carolina, speaking to attendees there about the power of art activism projects like this one, and this October, our dozen panels will be displayed with hundreds of others on the National Mall of our country’s capital. Some of you are already planning to attend one or both of these events, and there is still room (and need) for more. You might have mixed feelings too, and that’s okay: bring them all and join us in challenging the injustice of gun violence with the visual, visceral impact of the Soul Box Project.